By Christopher D. Absell and Antonio Tena Junguito (both at Carlos III, Madrid).

Abstract: The objective of this article is to reappraise both the accuracy of the official export statistics and the narrative of Brazilian export growth during the period immediately following independence. We undertake an accuracy test of the official values of Brazilian export statistics and find evidence of considerable under-valuation. Once corrected, during the post-independence decades (1821-50) Brazil’s current exports represented a larger share of its economy and its constant growth is found to be more dynamic than any other period of the nineteenth century. We posit that this dynamism was related to an exogenous institutional shock in the form of British West Indies slave emancipation that afforded Brazil a competitive advantage.

Distributed by NEP-HIS on: 2015-05-22 and published under the same title in Journal of Latin American Studies (Online, April 2016)

Reviewed by Thales A. Zamberlan Pereira (University of São Paulo)

The best place to find the (rather scarce)  macroeconomic data for 19th century Brazil are the official statistics compiled by the Brazilian Statistics Institute (IBGE). The IBGE data is the main source in Brian Mitchell’s international historical statistics and both are commonly used in the literature exploring Brazilian economic history. The paper by Absell and Tena is an attempt to test the accuracy of these sources by looking at official export statistics between 1821 and 1913. If nothing else this  already makes this an interesting paper.

The focus in export data relies on the argument that the Brazilian economy remained stagnant during the decades that followed Brazil’s independence until 1850 when there was renewed economic growth. While the more recent literature suggests the development of a domestic economy before 1850, the more “classic” literature focuses on the foreign sector to calculate Brazil’s economic growth in the 19th century.

Absell and Tena confirm previous findings that official export statistics were undervaluing exports after 1850. But their study extends to the earlier period and suggests that official statistics  also had a significant bias for the first half of the 19th century. In particular their analysis suggests that Brazilian export growth before 1850 was much higher than previously assumed and that a change in international demand, especially for coffee, was the principal determinant for this growth. The last section of the paper tries to explain the sources of Brazil’s “dynamic export growth” during the post-independence decades and shows that an increase in foreign demand was much more important than changes in domestic productivity. The high rate of growth in exports between 1821 and 1850, a very interesting result, is calculated by deflating prices using an index from a new series of commodities prices.

All of Absell and Tena’s results are grounded in the price correction of the official export data and, therefore, the most interesting part of the paper is the reconstruction of Brazil’s export statistics. To correct the official data, they used international prices for the different commodities (mainly cotton, sugar, and coffee) and subtract freight rates, insurance costs, and export taxes. That is, they convert c.i.f. (cost, insurance and freight) values to f.o.b. (free on board) creating new series for these variables. For insurance and freight rates they used trade data between Rio de Janeiro and Antwerp. It should be noted, however, that a large part of cotton exports before 1850 went to Britain, and freight rates between Brazil and Liverpool were half of what they were for freight travelling to Portugal or France.

Absell and Tena argue that official data for exports was sourced in a weekly table organized “by a government committee in consultation with local commodity brokers and commercial associations.” This information was then verified by the Ministry of Finance,  who sent the tables to provincial customs houses (which calculated the tax revenue) and also to major news periodicals. If the official values were organized like this for the whole period under study, as the authors argue, it would be easier to doubt the accuracy of exports statistics. But, it is difficult to understand how a system of weekly information could work in a country the size of Brazil during the 19th century. Before 1850, northern provinces like Maranhão had stronger business relationships with Lisboa and Liverpool than with Rio de Janeiro. Some northern provinces did not support independence in 1822 because of close economic ties with Portugal.

An additional issue is that many important provinces, even after 1850, did not use the weekly table to calculate their taxes. Evidence suggests that in Minas Gerais and São Paulo, two major coffee exporters, the government used a fixed price system to calculate taxes. See, for example, debates at the provincial assembly of Rio de Janeiro, November 1862, 1879; available online. This information, of course, does not invalidate the argument about the inaccuracy of official values, but it provides some clues that the authors’ correction could have a significant bias as well.

Another problem with the transformation to f.o.b. prices regards export duties. In the working paper version of this article, they assume this “additional trade cost” represented between 1 to 7 per cent of export values. There is extensive evidence, however, that export taxes were a much higher burden throughout the 19th century. Debates at the Chamber of Deputies, the Senate, and in newspapers show that before the fiscal reform in the 1830s, export duties for sugar and cotton could reach more than 20 per cent. The export duties also varied across provinces. After 1850, they continued to be at least 10 per cent.  The export duties presented by Absell and Tena are undervalued because their source from 1821 to 1869 only show the total revenue collected by the central government, not revenue collected by provincial custom-houses. Making assumptions in such calculations is valid, but information regarding data sources should have been more clearly explained in the published version. 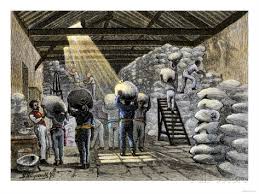 Because the objective of the authors is to correct export values using more accurate price data, it should be clear that they do not use only price for Brazilian commodities to adjust the official statistics. To correct the value of Brazilian cotton exports, for example, they use price information of Guyana Raw (Berbice or Demerara) and Middling Uplands (United States) to the United Kingdom. The figure below shows the price of an arroba of cotton in pennies (d) from four different sources, including two prices series for Brazil not used in Absell and Tena paper. The first is the price from the official statistics (IBGE), the second is the price of cotton at the port of Maranhão, the third is the price of cotton from Maranhão in Liverpool, and the last one in the average price of West Indies in Liverpool. As can be seen,  using prices for Brazilian cotton would change some of the magnitudes that the paper proposes.

In summary the paper by Absell and Tena makes a worthy contribution and it proposes a revisionist approach to an important source. An important problem in the paper, however, is not discussing how its own sources could limit their conclusions, a crucial aspect in any revisionist study.