The Emergence of an Export Cluster: Traders and Palm Oil in Early Twentieth-century Southeast Asia

Abstract: Malaysia and Indonesia account for 90 percent of global exports of palm oil, forming one of the largest agricultural clusters in the world. This article uses archival sources to trace how this cluster emerged from the rubber business in the era of British and Dutch colonialism. Specifically, the rise of palm oil in this region was due to three interrelated factors: (1) the institutional environment of the existing rubber cluster; (2) an established community of foreign traders; and (3) a trading hub in Singapore that offered a multitude of advanced services. This analysis stresses the historical dimension of clusters, which has been neglected in the previous management and strategy works, by connecting cluster emergence to the business history of trading firms. The article also extends the current literature on cluster emergence by showing that the rise of this cluster occurred parallel, and intimately related, to the product specialization within international trading houses.

In this article, Giacomin presents an archive-based historical analysis of how palm oil became one of the most important traded commodities from Southeast Asia to the world in the early- to mid-1900s. She uses the cluster (defined as a “geographically proximate group of interconnected companies and associated institutions in a particular field, linked by commonalities and complementarities”) approach to explain how the organizational structure of the pre-existing rubber cluster in the Malay peninsula (at the time a British colony) and Sumatra (under the Dutch) formed the basis for an emerging palm oil cluster in the same geographical region. 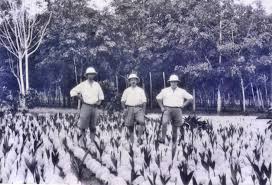 The first part of her paper focuses on how the regional rubber cluster structure developed. While the literature commonly credits unique local factors in the development of such clusters, Giacomin instead looks at nonlocal factors: (1) mainland Chinese traders that controlled regional trading routes from major Southeast Asian ports and brought in low-skilled tappers and harvesters from surrounding territories, and (2) Western traders that brought in capital inputs (seeds, machinery and finance) and highly-skilled human resources (estate managers and engineers) from Europe and other parts of the Empire and established headquarters in major European trading ports, allowing them to access crucial market information on demand. Both of these foreign merchant communities congregated in the emerging trading hub of Singapore, strategically located in between British Malaya and Dutch Sumatra, and developed a mutual dependency: Chinese contacts were vital for Western traders wanting to run a business in the Eastern colonies, while the Chinese needed Western traders to scale up their region-based commercial activity to a global scope.

The second part of the article explains how palm oil became the “spin-off” crop of the rubber cluster in the region. During the natural rubber boom in the early 1900s, the Malaya-Sumatra rubber cluster became over-dependent on this export and thus over-specialised in terms of existing practises, agronomic knowledge (through R&D agencies like the Rubber Research Institute), and coordinating institutions (eg. the Rubber Growers’ Association). When the advent of synthetic rubber in the 1920s caused natural rubber prices to fall, companies desperately looked to diversify their production to recoup and replace their losses. However, this over-specialisation meant that they could consider only a limited range of crops similar to rubber for diversification. As it happened, the rubber estate structure could be conveniently repurposed for into oil palm estates. Furthermore, the oil palm flourished in a much narrower latitude span compared to rubber, giving confidence to companies that the demand for palm oil would be more sustained since supply would be more limited.
Giacomin concludes that even though the literature often regards over-specialisation as fatal, in the case of the Southeast Asian rubber cluster, this serendipitously led to the emergence of one of the most enduring regional clusters serving the global economy. Today, Indonesia and Malaysia account for over 90% of global palm oil exports.

While the significance of the rubber sector in paving the way for palm oil in Malaysia and Indonesia is well known, this paper remains an important and significant addition to the current literature, not only on general business management and strategy, but also more specifically in terms of (1) palm oil expansion and development and (2) agricultural systems (estate vs. smallholdings). 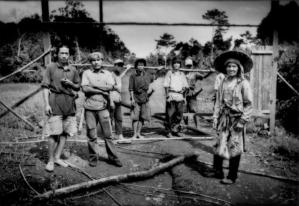 Firstly, the specific role of nonlocal (especially Chinese) entrepreneurs in connecting the production areas in this region to the consumption areas in the West was previously not well understood. In the context of the “global north” and “global south”, palm oil can be considered a uniquely “southern” vegetable oil. Compared to other oils like sunflower, rapeseed, and soya bean, the production, major business players, beneficiaries and direct impacts of palm oil is situated more comparatively in the global south. Giacomin alludes to this in reference to the narrow latitude where oil palm can be grown. This northern/southern framing has coloured much of the recent debates and controversies over palm oil today. This paper’s analysis on the historical role of Chinese merchants is especially useful in further informing the idea of palm oil as a “southern” oil, while at the same time, the equally important role of the Western merchants that Giacomin highlights may be useful in moderating certain northern arguments in this ongoing debate.

Secondly, the historical nature of Giacomin’s analysis of this sector is especially timely in the current period where other regions, like West Africa and Latin America, are looking to increase their global trading share of palm oil. Giacomin mentions that even though the oil palm originated from and was first produced commercially in West Africa during colonial times, Western African territories were unable to effectively penetrate global markets because they did not display the same institutional cohesion across neighbouring territories, something that Southeast Asia managed to do through the pre-existing rubber cluster. This “cluster” model may thus provide an exemplar to be used by emerging palm oil production regions and companies as an effective way to possibly break the current oligopoly (Indonesian and Malaysian firms) which is the palm oil industry. Especially for West Africa, which is considered the current “greenfield” area for palm oil outside Southeast Asia, current strategies can be developed to avoid past mistakes. 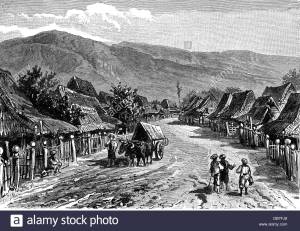 Finally, Giacomin’s analysis of early smallholders is useful to inform current discussions on the ideal agricultural systems for oil palm. Her paper argues that in the mid-20th century, the fact that the palm oil was an estate crop (involving high costs and favouring large-scale production) provided a solution to the problem previously faced by rubber companies that were facing competition from and losing market share to rubber smallholdings. While this might have been the case historically, oil palm today has been successfully adapted to the smallholder model in both Indonesia and Malaysia, with a significant share of both countries’ production (about 40% each) coming from either organised or independent smallholders. Giacomin’s analysis stops at the early decolonialisation period, before the newly independent nations began to formulate oil palm smallholder schemes as a strategic tool for rural development and poverty eradication for both countries. Her analysis however can serve as a useful starting point in the ongoing debates on if and how both the estate and smallholder systems can co-exist efficiently and in harmony.

Overall, this paper is a valuable piece of business history that helps to further shed light on a controversial agro-economic sector often shrouded in secrecy. The fact that palm oil continues to be a hot topic worldwide today underlines the relevance and importance of such forays into history to inform the present.