The market turn: From social democracy to market liberalism

By Avner Offer, All Souls College, University of Oxford (avner.offer@all-souls.ox.ac.uk)

This paper emerged from Avner Offer’s Tawney Lecture at the Economic History Society’s annual conference, Cambridge, 3 April 2016 (the video of which can be found here).

In this paper Offer discussed two macroeconomic innovations of the 20th century, which he calls “the market turn”. These are the changes in fiscal policy and financialisation that encompassed the shift  from social democracy to market liberalism from the 1970s onwards. Social democracy is understood as a fiscal innovation which resulted in the doubling of public expenditure (from aprox. 25 to 50 per cent of GDP between 1920 and 1980). Its aim was reducing wealth inequality. Market liberalism encompassed a monetary innovation, namely the deregulation of credit which allowed households to increase their indebtedness from around 50 to 150 per cent of personal disposable income, mainly for the purpose of home ownership. According to Offer the end result of market liberalism was increasing wealth inequality. See Offer’s depiction of this process in the graph below. 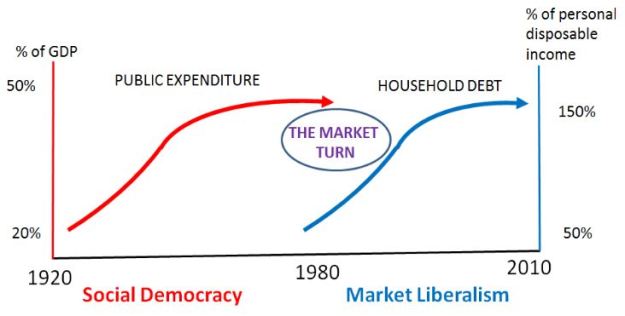 Answering any of these question is not simple and heated debates abound around them. Offer, however, rescues the idea of life-cycle dependency, where the situation of the most vulnerable individuals is alleviated through collective risk pooling rather than financial markets. According to Offer,  life-cycle dependency was the dominant approach to reducing poverty in most developed countries until the oil crisis of the early 1970s. Then collapse of the Bretton Woods accord that followed, led to the liberalization of credit by removing previous constraints. This in turn resulted in the “market turn”.

Offer then turns to analyse the events after the collapse of Bretton Woods that led to the increase of household indebtedness while focusing on the UK. The 1970s was a very volatile decade for Britain.  For instance, oil price increases and the secondary banking crises of 1973 resulted in the highest annual increase of the inflation rate on record. Offer argues, while citing John Fforde (Executive Director of the Bank of England at that time), that the Competition and Credit Control Act 1971 was as a leap of faith in the pursuit of greater efficiency in financial markets. This Act was accompanied by a new monetary policy where changes in interest rates (the price of money) by the central bank was to bring about the control of the quantity of money. Perhaps unexpectedly and probably due to a lack of a better understanding of the origins of money, that was not the case. Previously lifted credit restrictions had to be reinstated.

Credit controls were again lifted in the 1980s. This time policy innovations went further by allowing clearing (ie commercial) banks to re-enter the personal mortgage market. The Building Societies Act 1986  allowed building societies to offer personal loans and current accounts as well as opened a pathway for them to become commercial banks (which many did after 1989 and all those societies that converted  either collapsed or were taken over by clearing banks or both). Initially and up to the crash of house prices in September, 1992, personal mortgage credit grew continuously and to levels never seen before in the UK. According to Offer, during this period both political parties supported the idea of homeownership and incentivised it through programs like “Help to Buy”. However, the rise in the demand for housing combined with the stagnation in the supply of dwellings pushed up house prices, making it more difficult for first-time buyers to become homeowners. Additionally, according to Offer, the wave of easy credit of the 1980s brought with it an increase in wealth inequality and an increase in the fragility of the financial system. As debt repayments grew as proportion of income, consumption was driven down, with subsequent effects on production and services. On this Offer opined:

“In the quest for economic security, the best personal strategy is to be rich.” (p. 17)

The paper ends with possible and desirable futures for public policy initiatives to deal with today’s challenges around wealth inequality and mounting personal credit. He argues that personal debt should be reduced through rising inflation,  a policy driven write-off or a combination of both. He also argues to reinstate a regime where credit is rationed. He states that financial institutions should not have the ability to create money and therefore the housing market funding should return to the old model of building societies. He has a clear preference for social democracy over market liberalism and as such argues that austerity should end, since it is having the exact opposite effects to what was intended.

Offer’s thought provoking ideas comes at a time when several political and economic events are taking place (e.g. Brexit, Trump’s attack on Dodd-Frank, etc.) which, together, could be of the magnitude as “the market turn”. Once again economic historians could help better inform the debate. Citing R. H. Tawney, Offer opened the lecture (rather than the paper) by stating that:

“to be an effective advocate in the present, you need a correct and impartial understanding of the past.”

Offer clearly fulfils the latter, even though some orthodox economists might disagree with his inflationary and credit control proposals. As per usual his idea are a great contribution to the debate around market efficiency in a time when the world seems to be in constant distress. Perhaps we ought to generate more and better research to understand the mechanisms through which market liberalism generated the current levels of wealth inequality and financial instability that Offer describes. More importantly though, is analysing if social democracy can bring inequality down as it did in the past. In my view, however, in a world where productivity seems to be stagnated, real wages are decreasing, and debt keeps growing, it is highly unlikely that the public sector can produce the recipe that will set us in the path of economic prosperity for all.

Offer, A., & Söderberg, G. (2016). The Nobel Factor: The Prize in Economics, Social Democracy, and the Market Turn. Princeton University Press.
(Read an excellent review of this book here)

2 thoughts on “How do we eliminate wealth inequality and financial fragility?”