Abstract – Although those born after the 1990s might never have known a time without them, payment cards and the electronic and computing networks they activate went through an explicit process of creation and adoption—a process which actively shaped these ubiquitous systems into what they are today. To understand why these systems ended up the way they did, one first needs to understand their origins, and how decisions made in their early years fundamentally shaped the way they evolved.

Electronic Value Exchange recaptures the origins of one of these systems in particular: the electronic payment network known as VISA. The book examines in detail the transformation of the VISA system from a collection of non-integrated, localized, paper-based bank credit card programs into the cooperative, global, electronic value exchange network it is today. Following an introductory chapter that sets the context, chapters adhere roughly to chronological order, building the story in a logical fashion. 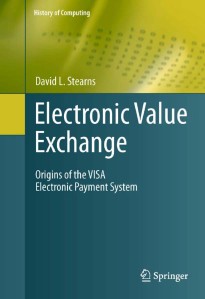 This is another instalment of Springer’s efforts under Martin Campbell-Kelly to offer an alternative to venue for publication in the History of Computing. It is also the book version of David Stearns’ dissertation (read under Donald MacKenzie at Edinburgh). One would ask what is novel, particularly on the back of David Evans and Richard Schmalensee’s Paying with Plastic, , a pioneering research on multi-sided markets through the study of credit cards. Well, Stearns offers a fascinating narrative that navigates somewhere between the sociology of finance, social studies of technology, retail banking and business history.

The book has a preface, an introduction, eight chapters and a conclusion. Length is well balanced with each chapter representing about 10% of the total. There is an alphabetic index and most references appear as footnotes. Sending citations, sources, references to interviews, and other material to the endnotes and leaving comments as footnotes, by the way, could have a better use of the lower margin. There are four illustrations and a handful of tables. This was a shame given that the subject mater was prone to both. For instance, see the very interesting yet inaccurate representation of the history of credit card debt in the “info graph” entitled Indebted to Plastic.

So it is a pity as many more of the macro dimensions of the discussion could have been illustrated through active use of tables and graphs. There is also a list of interviewees and a helpful list of acronyms.

The preface offers a crystal clear map to the book (pp. xiv-xv), which I freely and unashamedly borrow as the backbone of my review. The style is open and quite engaging, the discussion is easy to follow but based on deep, detailed and authoritative fieldwork. However, at times one can still come across its roots as a dissertation and particularly the end section of several chapters. Another such example is that in spite of a clarification on page ix, we really learn about how the title relates to VISA’s story until page 136 (chapter 7). Here some of the end sections of the early chapters could have been used to explain how developments up to that point took Visa a step closer (or not) towards their dominant role in facilitating electronically-processed transactions and the emergence of a global retail payments system.

Chapter 1 begins the story with a brief stroll amongst the origins and early forms of charge cards, travel & entertainment cards, and store cards. Some of these plus the peculiarities of the Federal Reserve’s cheque clearing system are important, Stearns argues, to understand the path of development that credit cards took later on as well as the context in which one of these cards in particular, the BankAmericard licensed by Bank of America, is born. In this first chapter Stearns deals with why this system was born in California and not in any other of the 20 states that allowed inter-state branching (pp. 19-20). The US-centred view that emerges in the first chapter dominates the discussion onwards as, for instance, he fails to point out that correspondence banking and inter-bank clearing were well established in Europe long before the 1900s.

Chapter 2 analyses the national network built around the BankAmericard, pointing out its various operational and organizational problems. Here is when we are introduced to Dee Ward Hock, Visa’s founder and first chief executive. 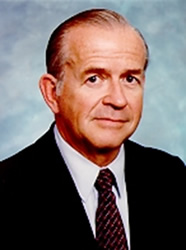 Throughout the reminder of the book Stearns will describe how Hock’s philosophical ideas and strong personality shaped the structure and development of the Visa organization (initially known as National BankAmericard Incorporated or NBI) from its inception until Hock’s acrimonious departure in 1984. Stearns convincingly argues that Hock’s strong personality and ideas have a major impact on the growth of Visa. But although he endeavours to present these in their context and tries to have different ‘voices’ speak, the narrative often reads more like a biography of Hock than a business history of Visa. Stearns does note that Hock had little schooling and goes on to explain his ideas on biological evolution but not that these were also common amongst US management scholars of the 1950s and 1960s (such as Russell Ackoff and Edith Penrose). He presents inter-bank collaboration as somewhat of an epiphany for Hock. This could have had more impact if the limitations of US regulation had been explained in a bit more detail or presented in a wider context, that is, along side the fact that collusive and non-collusive collaboration was common amongst European banks whilst this was an anathema to the predominant conception of competition in US retail banking. Alternatively, he could have argued how in the search for scale and scope capitalist organizations are ready to embrace principles that would be typical of mutual and co-operative forms.

Stearns takes a bit of a sociological detour in Chapter 3 to discuss the role of the operating regulations in a co-operative network like NBI/Visa. His aim is to link the social dynamics of the system to the establishment of the operating regulations. His point is that these emerge from the almost collapse of the NBI network. Therefore, he says, these regulations are a key part of what makes the Visa system ‘work’ at the inter-organizational level. Stearns also argues that Visa’s role in adjudicating these rules helps establish just enough ‘trust’ between the competing participants for the system to function and grow. Although he could have used the more ‘sophisticated’ framework of transaction cost economics rather than ‘trust’ to explain how Hock and the regulations are able to realign incentives and avoid renegotiating contracts, his argument here is nevertheless clear, namely that Visa’s technical infrastructure was and still is, very adept at moving transactional information between participants in the system, but the operating regulations were and are the one thing which allows participants to coordinate their work in response to that information.

Chapters 4 to 7 offer some of the most thrilling and well research aspects of the book. Here is where Stearns background as a computer programmer comes to the fore, as he is able to explain in simple, layman terms the intricacies of building a major computer system. I must admit my eyes did water in incomprehension … but only once! (during the explanation of ACP/TPF installations, circa p. 128-9 – which I skipped without much loss). In any event, these chapters make a real contribution to the field as he is able to grasp the importance of details that would have escaped the researcher with an economics or history background. As I said, developments are explained largely without jargon and with the non-specialist reader very much in mind. 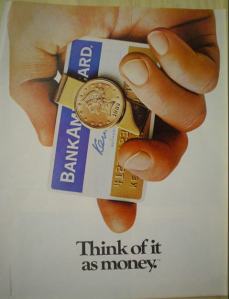 Their iconic ad, which was intended to communicate Hock’s vision for the card.

In Chapter 4 he begins to deal with the technological aspects of Visa by describing in detail NBI’s first computerized authorization and clearing systems, known mostly by their acronyms BASE I and II. NBI was of course not the only organization building such systems in the early 1970s, and these chapters put their systems in the context of other similar efforts by individual banks, independent processors, and bank service organizations. Chapter 5 also discusses NBI’s first significant technical failure, a program intended to run within the member banks’ processing centres, known as BASE III.

Chapter 6 charts the various ways in which the system was expanded throughout the 1970s, both technically and organizationally. On the organizational side, he discusses the formation of the international version of the organization and the name change to ‘Visa’. It was a pity that the story of the judiciary process around the antitrust battles narrated in this chapter relied mainly on articles published in American Banker and no attempt was made to look at actual court records. However, the story behind the institution of ‘duality’ offers further ammunition to show that the so-called random events that lead to path dependence are not so random after all but often based in organizational logic. Specifically, his research show that Visa predominates over Mastercard among other thing because at the critical point after the introduction of ‘duality’, Visa is able to respond limit opportunities for banks (and their customers) to migrate to Mastercard.

On the technical side, Chapter 6 discusses the shift of BASE I to the Airline Control Program (ACP) running on IBM hardware, the creation of a second cooperative data centre, the expansion of the electronic authorization network internationally, and multi-currency settlement. By holding organizational and technical aspects together he offers interesting insights into the so called ‘productivity paradox’, in other words, he can tell exactly when and how computer systems enabled the organization to grow and expand. This is somewhat a departure from previous studies on the history of computing in business (and certainly in banking), which have documented the use of technology to increase efficiency. Stearns’ focus on Visa gives us the first glimpses of early computer applications that enhance effectiveness in financial service organizations.

Chapter 7 returns to the technological aspects of authorization, describing how Visa helped fully-automated the point-of-sale. It discusses the various debates surrounding how to make the cards machine readable, and Visa’s role in stimulating the development and widespread adoption of inexpensive merchant dial terminals. Here Stearns sometime dwells into multi-sided markets but without really tackling the issue head on.

Point of Sale Terminal, circa 2012

Chapters 8 and 9 examine the ways in which the role of the central organization had to be worked out through a series of power struggles with the member banks. Chapter 8 chronicles an episode of the ‘cashless society’ through the history of Visa’s debit card, first introduced in 1975, but not widely issued until several decades later. This chapter argues that this delay had more to do with the ways in which the debit card clashed with the member banks’ existing electronic funds transfer (EFT) plans, and disputes about Visa’s role in the deposit side of the banks. Chapter 9 continues the theme of negotiations by discussing other controversial moves by the central organization: the creation of a Visa-branded travellers cheque; the direct signing of the national retail giant JC Penney by Visa USA; and various signs of empire building that eventually resulted in Hock being forced out of the organization.

Chapter 10 concludes the book by summarizing the narrative. Again there is perhaps a little bit too much of this and echoes a dissertation rather than a research monograph. It frames the book’s contribution around the grand themes discussed at the start. But I feel the reader can get easily lost in his attempt to offer two new dynamics that Stearns thinks may apply to the study of other payment systems or cooperative transactional networks in general. A number of terms and concepts emerge here that were not introduced before and its really rather late in the text to ask the reader to reflect on this rather than flagging them at the start as it is the convention.

You can read Stearns’ witty and insightful musings regularly on his tech.soul.culture blog.

Acknowledgements A shorter version of this review is forthcoming in Business History. Many thanks to Kevin Tennent and the editorial board of NEP-HIS Blog for allowing early publication.