by Kevin Hjortshøj O’Rourke (All Souls, University of Oxford)

Abstract: In this paper, I offer some preliminary comparisons between the trade collapses of the Great Depression and Great Recession. The commodity composition of the two trade collapses was quite similar, but the latter collapse was much sharper due to the spread of manufacturing across the globe during the intervening period. The increasing importance of manufacturing also meant that the trade collapse was more geographically balanced in the later episode. Protectionism was much more severe during the 1930s than after 2008, and in the UK case at least helped to skew the direction of trade away from multilateralism and towards Empire. This had dangerous political consequences.

Comparisons between the Great Depression of the 1930s and the Great Recession of 2008-10 have been performed by several scholars interested in the lessons that we could draw from history. Famous examples are Eichengreen’s Hall of Mirrors: The Great Depression, The Great Recession, and the Uses-and Misuses-of History in which the economic policies in the two crisis are compared, or Crafts and Fearon’s The Great Depression of the 1930s: Lessons for Today” in which contribution from a variety of fields are collected. The paper by Kevin O’Rourke proposed here contributes to the same line of research by using a large body of empirical evidence on both the Great Depression and the Great Recession to compare the different outcomes on trade of the two crises. In both the 1930s and 2008-10, the level of global trade experienced a contraction; however, the effect was initially more sever in the latter but much more persistent in the former, pointing to different dynamics in the two cases. Figure 1 illustrates the two trajectories.

Figure 1: World Trade during the Great Depression and the Great Recession: months after June 1929 and April 2008

According to the author, the striking different behaviors of trade in the two crises are linked to a different composition of the world exports. On the eve of the Great Depression, industrial products accounted for roughly 44% of total trade; in 2007 the same figure had risen to 70%. This is important in the light of different volatilities of these two broad classes of goods. Figure 2 shows world trade divided into manufacturing and non-manufacturing during the Great Depression while Figure 3 shows the same for the Great Recession. 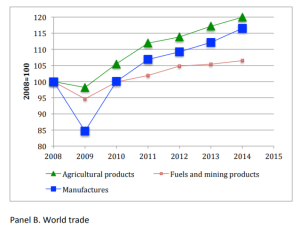 From these two graphs, we see that in both cases non-manufacturing trade (basically composed of agricultural products) did not collapse but it was rather the manufacturing exporting sector that suffered the most (of course this is in terms of volumes, not prices). The compositional effect therefore explains the much more violent decrease in the first years of the Great Recession, but also the faster recovery (although the former is discussed by O’Rourke much more in detail compared to the latter). O’Rourke illustrates this compositional effect using counter-factual analysis which basically applies the shares of manufacturing and non-manufacturing of 2007 to trade during the Great Depression, showing that the pattern is very much changed depending on the composition. The different share of manufacturing during the two crises is driven by the catch up of the periphery, and in particular Asia, which was during the Great Recession much closer to the level of industrialization of the core countries, leading to a more “regionally balanced” shock at world level.

The Great Depression had seen a deterioration of the terms of trade of developing countries, leading to an increase in protectionist measures. O’Rourke suggests that one of the explanations to both the depression and the protectionist measures is found in the monetary regime: the Gold Standard had deprived countries of the possibility to implement counter-cyclical monetary policies, leading to the sole use of protectionist policies in the attempt to contrast the former. The lack of coordination among countries, which got off gold in different moments, made the late movers deal with an overvalued currency which worsened their position even further.  The paper also contains a positive assessment of the crisis response after the 2008 crash, when countries behaved in a much more coordinated fashion and were able to apply monetary and fiscal stimulus which ultimately led to a much shorter contraction of trade worldwide.

Figure 4: Victims of High Tariffs during the Great Depression.

Using again a counterfactual analysis, O’Rourke (citing his work with de Bromhead et al., 2017) shows that also the existence of trading blocs, and notably the British Empire, led to a “balkanization” of trade during the 1930s. This ultimately led to a contraction of overall trade that was not observed in the much more multilateral trade environment of 2008-10. More multilateralism also led to more efficient specialization worldwide and therefore to a milder effect of the crisis on trade.

The paper provides several policy-oriented results that should be considered in times of economic crisis (and to some extent cast a positive light on how the latest crisis has been handled). The first result is that multilateralism in trade is good for everyone because of its expansive effect of trade. The recent attacks to multilateral trade agreements, for instance through the threat by the US to leave NAFTA or by the UK to leave the EU single market, are dangerous both economically and politically. The paper also contains a historically grounded praise of the monetary and fiscal policies pursued in this latest crisis compared to the detrimental ones in the 1930s. Maybe, after all, we do learn from our mistakes and this is also thank to the efforts by economic historians.

Eichengreen, B. (2015) Hall of Mirrors: The Great Depression, The Great Recession, and the Uses-and Misuses-of History. Oxford: Oxford University Press.