Abstract: British general incorporation law granted companies an extraordinary degree of contractual freedom. It provided companies with a default set of articles of association, but incorporators were free to reject any or all of the provisions and write their own rules instead. We study the uses to which incorporators put this flexibility by examining the articles of association filed by three random samples of companies from the late nineteenth and early twentieth centuries, as well as by a sample of companies whose securities traded publicly. Contrary to the literature, we find that most companies, regardless of size or whether their securities traded on the market, wrote articles that shifted power from shareholders to directors. We find, moreover, that there was little pressure from the government, shareholders, or the market to adopt more shareholder-friendly governance rules.

Tim Guinnane, Ron Harris and Naomi Lamoreaux are three scholars that every young (and old) economic historian should seek to emulate. This paper showcases once again their prodigious talent – there is careful analysis of the institutional and legal setting, a lot of archival evidence, rigorous economic analysis, and an attempt to understand how contemporaries viewed the issue at hand.

In this paper, Guinnane, Harris and Lamoreaux (GHL) examine the corporate governance of UK companies in the late nineteenth and early twentieth centuries. The UK liberalised its incorporation laws in the 1850s and introduced its first Companies Act in 1862. From a modern-day perspective, this Act enshrined very little in the way of protection for shareholders. However, the Appendix to the 1862 Companies Act contained a default set of articles of association, which was the company’s constitution. This Appendix, known as Table A, provided a high level of protection for shareholders by modern-day standards (Acheson et al., 2016). However, the majority of companies did not adopt Table A; instead they devised their own articles of association. 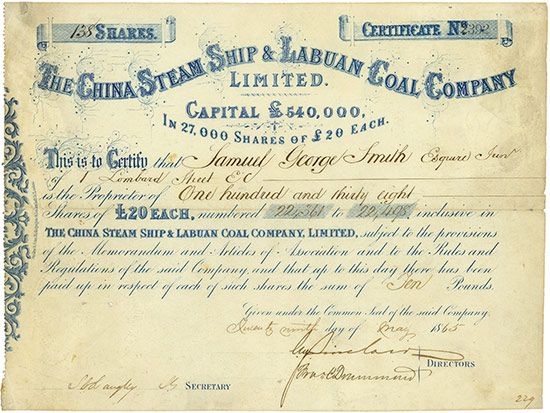 The aim of GHL’s paper is to analyse articles of associations in 1892, 1912 and 1927 to see the extent to which they shifted power from shareholders to directors. To do this, GHL collected three random samples of circa 50 articles of association for 1892, 1912 and 1927. Because most (if not all) of these companies did not have their securities traded on stock markets, they also collected sample of 49 commercial and industrial companies from Burdett’s Official Intelligence for 1892 that had been formed after 1888. However, only 23 of these companies had their shares listed on one of the UK’s stock exchanges.

GHL then take their samples of articles to see the extent to which they deviated from the clauses in Table A. Their main finding is that companies tended to adopt governance structures in their articles which empowered directors and practically disenfranchised shareholders. This was the case no matter if the company was small or large or public or private. They also find that this entrenchment and disenfranchisement becomes more prominent over time. However, GHL unearth a puzzle – they find shareholders and the market appeared to have been perfectly okay with poor corporate governance practices.

How do we resolve this puzzle? One possibility is that shareholders (and the market) at this time only really cared about dividends. High dividend pay-out ratios in this era kept managers on a short leash and reduced the agency costs associated with free cash flow (Campbell and Turner, 2011). Interestingly, GHL suggest that this may have made it more difficult for firms to finance productivity-enhancing investments. In addition, they suggest that the high-dividend-entrenchment trade-off may have locked in managerial practices which inhibited the ability of British firms to respond to future competitive pressures and may ultimately have ushered in Britain’s industrial decline.

Another solution to the puzzle, and one that GHL do not fully explore, is that the ownership structure of the company shaped its articles of association. The presence of a dominant owner or founding family ownership would potentially lessen the agency problem faced by small shareholders. In addition, founders may not wish to give too much power away to shareholders in return for their capital. On the other hand, firms which need to raise capital from lots of small investors on public markets may adopt more shareholder-friendly articles. The vast majority of companies in GHL’s sample do not fall into this category, which might go some way to explaining their findings.

A final potential solution is that the vast majority of firms which GHL examine may have raised capital in a totally different way than public companies, and this shaped their articles of association. These firms probably relied on family, religious and social networks for capital, and the shareholders trusted the directors because they personally knew them or were connected to them through a network. Indeed, we know precious little about how and where the multitude of private companies in the UK obtained their capital. Like all great papers, GHL have opened up a new avenue for future scholars. The interesting thing for me is what happens when private firms went public and raised capital. Did they keep their articles which entrenched directors and disenfranchised shareholders?

Unlike the focus of GHL on mainly private companies, a current Queen’s University Centre for Economic History working paper examines the protection offered to shareholders by circa 500 public companies in the four decades after the 1862 Companies Act (Acheson et al., 2016). Unlike GHL, it takes a leximetric approach to analysing articles of association. Acheson et al. (2016) have two main findings. First, the shareholder protection offered by firms in the nineteenth century was high compared to modern-day standards. Second, firms which had more diffuse ownership offered shareholders higher protection.

How do we reconcile GHL and Acheson et al. (2016)? The first thing to note is that most of Acheson et al’s sample is before 1892. The second thing to note is that in a companion paper, Acheson et al. (2015) identify a major shift in corporate governance and ownership which started in the 1890s – companies formed in that decade had greater capital and voting concentration than those formed in earlier decades. In addition, unlike companies formed prior to the 1890s, the insiders in these companies were able to maintain their voting rights and entrench themselves. This corporate governance turn in the 1890s is where future scholars should focus their attention.