The Theory of Economic Development of J.A. Schumpeter: Key Features

Abstract: This paper comprises translation into English of the preface of Iurii Bazhal to the first Ukrainian edition of Joseph Schumpeter’s famous fundamental book “The Theory of Economic Development: An Inquiry into Profits, Capital, Credit, Interest, and the Business Cycle” that was translated in Ukrainian and published in 2011 in commemoration of its 100th anniversary. The paper reveals the contemporary significance of this classical book as the challenger on replacing the neoclassical approaches in capacity to become the mainstream of modern economic theory. It is shown that Schumpeter’s approach gives a new vision of driving forces for economic development where a crucial conceptual place belongs to the category of innovation. Second part of the paper reviews modern Neo-Schumpeterian approaches which have substantiated the importance of the structural innovation technological change of national economy for economic development. The government must permanently analyze a compliance of the actual production structure in the country with the current and future technological paradigms.

In an effort to recommend economic policy solutions to the “young market economy” of Ukraine, Iurii Bazhal breaks down Joseph Schumpeter’s principles of national economic development, arguing that current global implementations of economic development policies dominated by the neoclassical economic model are not generating and have never generated “evolutionary innovative ‘jumps.’”(p. 12). Emerging economies and stagnant advanced economies would benefit immensely from the revision of the neoclassical approach, centering instead on the Neo-Schumpeterian approach that recognizes economic structures of technological systems as the base of long-term economic growth (idem). From Bazhal’s perspective, business-government partnerships should focus on national economic development strategies that center on the creation and advancement of innovative technological systems that generate revolutionary global social, cultural, economic, and political change.

These historical transformations that have changed humanity and its relation to resources and the natural world have catapulted some nations into positions of power that have translated into national economic prosperity. Bazhal identified five “paradigms” that altered the economic development of the modern world, including the substitution of machinery for handwork in weaving (1790-1850), coal mining and the steam engine (1851-1895), iron industry (1896-1946), oil based energy and organic chemistry products (1947-1989), and microelectronics (1990-2040). Schumpeter identified these periods as “dynamic” periods of economic development (pp. 4 & 13).

Contrary to “static” development where reproduction of traditional production structures were replicated nation after nation across the world, “dynamic” economic development based on technological innovation was and continues to be the only solution for capitalist nations interested in substantially increasing their national wealth and social welfare (p. 4). Nations spearheading the different periods of global innovation promoted and justified the implementation of the revised status quo in order to legitimize its global systemic outreach, restraining other nation’s ability to create and produce new dynamic value added solutions to their own development strategy (idem). This, said Bazhal, explained the “trap” that has impeded the present economic development of nations such as Ukraine (idem).

In order to achieve “dynamic” economic development like the one that catapulted Britain and the United States into positions of global power, it was necessary to move beyond the “model of circular flow of income and expenditure between firms and households” promoted by the neoclassical macroeconomic model (p. 6). This Schumpeterian view that “new combinations” of economic development strategies and technologies is what takes nation states into new realms of economic development patterns is what Bazhal is arguing for Ukraine. Combinations, I would argue, that are exemplified in Brazil’s reinvention into an ethanol-based economy that moved the nation away from oil dependency and thus breaking the restrains imposed by the oil based development model advanced by the United States throughout the Twentieth Century. Brazil’s case represented a “disruption of equilibrium by new combinations,” as Schumpeter would put it (p. 7). A new equilibrium based on an increase in the size of resources, the size of capital, the size of the labor force and the size of the national domestic product represent at that point Schumpeterian dynamics of economic development. Impactful and effective economic development therefore lies in business-government relations where the innovative entrepreneur has the flexibility and authority to influence the direction of policy; norms, regulations, and institutional designs that allow the entrepreneurial forces to implement and carry forward new “combinations or innovations”(idem).

A more deregulated system, argues Bazhal, would allow Ukraine’s entrepreneurial forces to move forward with the model recommended by Schumpeter. Yet the neoclassical restrains promoted by the European Union, the United States and the multilateral agents impede the clicking of new combinations (p.8). Ukraine’s economic development salvation lies in the invention or creation of a “new technological paradigm” that will catapult the nation into a more advanced economic development stage within the global economic market system (p. 11). This evolutionary dynamic, argues Bazhal, must be accompanied by “structural technological changes” that will guarantee stable economic development conditions at the design and implementation stages of the policy.

Schumpeter’s theory indicates that for this to take place, the nation’s business and political actors must also be willing and prepared to execute the “creative destruction” of the traditional systems and philosophical ideas of production. This aspect of the evolutionary process, from my perspective, is what is impeding Brazil from capitalizing fully from its transformation into an ethanol-based economy. Although not highlighted by Bazhal, the economic, political, social, cultural, domestic and international struggle against the forces of status quo are factors that require a more thorough analysis. In the case of Ukraine it is these same forces that block the nation’s self-determined transition into an evolutionary technological economic development dynamic. 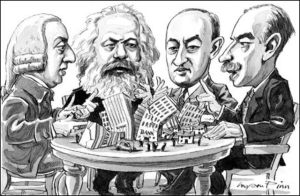 The implementation of a Neo-Schumpeterian economic development model in Ukraine or in any other nation across the world would look similar, in relative terms, to what happened in the United States during the oil or the microelectronics era. The new technological wave became the core driver of the nation’s economy, impacting at first the internal dynamics and systems of production and then replicating the same outcome nation after nation in incremental patterns. Not all nations converted to fossil fuels at once but eventually all did, accompanied by the construction of roads for the transit of vehicles together with the adoption of multiple other technologies and innovations that justified the conversion into a fossil fuels-based world. The same pattern has been developing on front of our eyes as the world adjusts to the microelectronics era.

As in the case of Brazil, a new technological innovation emanating from Ukraine would result in new structures of enterprise, new dynamics and interrelations between multiple economic indicators and sectors, new secondary and service productions sectors, in addition to value added systems, new forms and sectors for investment, new capital flows, new consumption patterns, and new domestic and international patters of trade flows.

Theoretically Bazhal’s advancement of the New-Schumpeterian model as the adequate paradigm shift for the Ukrainian economy is convincing and proven to be effective, as I pointed out in the case of Brazil, but the challenge remains in the implementation stage. Although Bazhal is aware that the technological revolution results in drastic changes on the state’s economic system and that it threatens the interests of those currently benefitting from the production status quo, he never provides his or Schumpeter’s solutions to these challenges. The success stories of Britain and the United States in altering the technological status quo indicate that domestically engineered social and political control systems must become an integral part of the sophisticated nation building process of post-modern nation states in order to secure flexibility for Schumpeter’s entrepreneur and the effective and efficient maneuverability of the government-business partnerships that advance the Neo-Schumpeterian model domestically and internationally.