Inherited Wealth over the Path of Development: Sweden, 1810–2010

Abstract: Inherited wealth has attracted much attention recently, much due to the research by Thomas Piketty (Piketty, 2011; 2014). The discussion has mainly revolved around a long-run contrast between Europe and the U.S., even though data on explicit historical inheritance flows are only really available for France and to some extent for the U.K. We study the long-run evolution of inherited wealth in Sweden over the past two hundred years. The trends in Sweden are similar to those in France and the U.K: beginning at a high level in the nineteenth century, falling sharply in the interwar era and staying low thereafter, but tending to increase in recent years. The levels, however, differ greatly. The Swedish flows were only half of those in France and the U.K. before 1900 and also much lower after 1980. The main reason for the low levels in the nineteenth century is that the capital-income ratio is much lower than in “Old Europe”. In fact, the Swedish capital-income ratio was similar to that in the U.S., but the savings and growth rates were much lower in Sweden than in the U.S. Rapid income growth following industrialization and increasing savings rates were also important factors behind the development of the capital-income ratio and the inheritance flow during the twentieth century. The recent differences in inheritance flows have several potential explanations related to the Swedish welfare state and pension system. Sweden was “un-European” during the nineteenth century because the country was so poor, Sweden is “un-European” today because so much wealth formation has taken place within the welfare state and the occupational pension systems.

The paper by Ohlsson, Roine and Waldenström was distributed by NEP-HIS on 2014-08-25. It provides annual estimates of inheritance flows and of the share of inherited wealth over total wealth for Sweden covering fully two centuries, from 1810 to 2010. In this period, Sweden changed deeply: originally a relatively poor and mostly agrarian country, by the 1970s it was one of the wealthiest areas of the world. It also became known for its particularly extensive welfare state.

Building upon earlier research conducted by Roine and Waldenström on wealth concentration and on the wealth-income ratio in Sweden, the paper points out a striking difference between such country and other European areas: while in nineteenth-century France and U.K. the wealth-income ratio was in the 600-700 percent range, in Sweden it stayed within the 300-500 percent range until the early twentieth century. These values are similar to those characterizing the U.S., and the authors argue that they go hand in hand with the limited importance of inheritance flows in nineteenth century Sweden and the U.S. compared to France and the U.K. In both Sweden and the U.S., limited historical accumulation of wealth explains initial low wealth-income ratios.

However, the similarities stop here as the authors describe the first as a poor country characterized by sustained out-migration, and the second as a “land of opportunity”. By 1950, in all the four countries wealth-income ratios had converged to low levels (generally speaking, in the 200-400 percent range, with Sweden even falling below 200 in the 1970s). In recent decades, all four countries experienced a tendency to the increase in the wealth-income ratio. In Sweden, however, the increase has been smaller and what is more, it has resulted into an only minimal increase in inheritance flows. 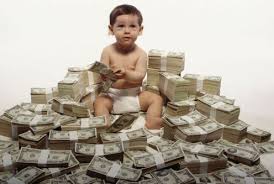 The core of the paper consists in an attempt to reconstruct the long-term evolution of inherited wealth (b), which is shown to have been around 11 percent of the national income throughout the nineteenth century (half the figure for France and the U.K.), later dropping to just 5 percent around 1970. Following Piketty’s approach, the authors decompose the inheritance flow into its determinants which comprise, apart from the wealth-income ratio (β), the ratio of the average wealth at death to the average wealth of the living (μ) and the mortality rate (m). This can be described with a simple formula:

Ohlsson, Roine and Waldenström provide a novel perspective on an old story – how Sweden became an exceptionally “egalitarian” Western society – by making excellent use of the analytical tools produced by the recent wave of research on long-term changes in inequality. They provide many interesting and useful insights into two centuries of Swedish history, although sometimes more detail would be useful. For example the statement, that maybe the recent increases in the wealth-income ratio translated only partially into an increase in the share of inherited wealth because new wealth was accumulated mainly by the relatively young, would probably require more supporting evidence.

Particularly interesting is the analysis of the role played by the public in transferring wealth inter-generationally, by means of an exceptionally generous welfare state which basically replaces part of the private inheritance (and influences the pattern of private savings). Perhaps this aspect would have been worthy of further discussion, clarifying for the international reader how such welfare state system came into being, but also pointing out at possible cultural differences between the Swedish and others which might explain a preference for both a more developed welfare state, and lesser wealth (and income) inequality in general. Instead, Ohlsson and colleagues simply suggest that Sweden was «un-European» essentially because «old wealth was not as important in Sweden as it was in France and the U.K. in the 1800s», this in turn being due to the fact that «Swedes were so poor that they simply needed to eat almost all their income in the pre-1900 era» (pp. 21-22). But, looked at from the view point of continental Europe, Sweden has many other peculiarities which might be relevant in explaining the dynamics that the authors so convincingly reconstruct. This being said, the paper is clearly an important contribution to current debates on long-term changes in inheritance and inequality, pointing out many aspects which would well be worthy of more international research.

Atkinson, A.B. (2012) “Wealth and Inheritance in Britain from 1896 to the Present”, Working Paper, Oxford University.