The First Update of the Maddison Project: Re-estimating Growth Before 1820

Abstract: The Maddison Project, initiated in March 2010 by a group of close colleagues of Angus Maddison, aims to develop an effective way of cooperation between scholars to continue Maddison’s work on measuring economic performance in the world economy. This paper is a first product of the project. Its goal is to inventory recent research on historical national accounts, to briefly discuss some of the problems related to these historical statistics and to extend and where necessary revise the estimates published by Maddison in his recent overviews (2001; 2003; 2007) (also made available on his website at http://www.ggdc.net/MADDISON/oriindex.htm).

Angus Maddison (1926-2010) left an impressive heritage in the form of his GDP estimates. These consider almost all of the world, from Roman times until our days, and are regularly cited by both specialists and non-specialists for long-run comparisons of economic performance. The Maddison project was launched in March 2010 with the aim of expanding and improving Maddison’s work. One of the first products is the paper by Jutta Bolt and Jan Luiten van Zanden, which aims to provide an inventory while also critically review the available research on historical national accounts. It also aims “to extend and where necessary revise” Maddison’s estimates. This paper was circulated by NEP-HIS on 2014-01-26.

The paper starts by presenting, in a concise but clear way, the reasons that motivated the Maddison’s project and its main goals. It also tells that some issues are left to be the subject of future work, particularly thorny issues left out include the use of 2005 purchasing power parities rather than Maddison’s (1990) ones; and the consistency of benchmarks and time series estimates over countries and ages.

Firstly (and fairly enough, from a ontological perspective) Bolt  and van Zanden deal with the possibility of providing greater transparency in the estimates. Instead of presenting the margins of errors of each estimate (which in turn would be based “on rather subjective estimates of the possible margins of error of the underlying data”), the authors, following an advice by Steve Broadberry, choose to declare explicitly the provenance of the estimates and the ways in which they have been produced. This leads to classifying Maddison’s estimates in four groups: a) official estimates of GDP, released by national statistical offices or by international agencies; b) historical estimates (that is, estimates produced by economic historians) which roughly follow the same method as the official ones and are based on a broad range of data and information; c) historical estimates based on indirect proxies for GDP (such as wages, the share of urban population, etc.); d) “guess estimates”.

Then the article moves on to review and discuss new estimates: although revisions for the nineteenth and twentieth century (mostly falling under the “b” category) are also incorporated, the most important changes come from the pre-industrial era (“c” kind estimates). For Europe, we now have a considerable amount of new work, for several countries including England, Holland, Italy, Spain and Germany (but not for France). The main result is that, from 1000 to 1800 AD, growth was probably more gradual than what proposed by Maddison; that is, European GDP was significantly higher in the Renaissance (above 1000 PPP 1990 dollars in 1500, against 771 proposed by Maddison); hence, growth was slower in the following three centuries (1500-1800), while faster in the late middle ages (1000-1500). For Asia, the new (and in some cases very detailed) estimates available for some regions of India (Bengal) and China (the Yangzi Delta), for Indonesia and Java, and for Japan, confirm Maddison’s view of the great divergence, against Pomeranz revisionist approach: in the late eighteenth and early nineteenth century, a significant gap between Europe and Asia was already present (for instance GDP per capita in the whole of China was 600 PPP 1990 dollars in 1820, as in Maddison; against 1455 of Western Europe, instead of 1194 proposed by Maddison).

New estimates are also included for some parts of Africa and for the Americas, with marginal changes on the overall picture (for the whole of Latin America, per capita GDP in 1820 is set to 628 PPP 1990 dollars, instead of 691). For Africa, however, there are competing estimates for the years 1870 to 1950, by Leandro Prados de la Escosura (based on the theoretical relationship between income terms of trade per head and GDP per capita) on the one side, and Van Leeuwen, Van Leeuwen-Li and Foldvari (mostly based on real wage data, deflated with indigenous’ crops prices) on the other. The general trends of these differ substantially: the authors admit that they “are still working on ways to integrate this new research into the Maddison framework” and thus at the present no choice is made between the two, although both are included in the data appendix.

New long-run estimates are presented also for the Near East, as well as for the Roman world, in this latter case with some differences (smaller imbalances between Italy and the rest of the empire) as compared to Maddison’s picture. The authors also signal the presence of estimates for ancient Mesopotamia, produced by Foldvari and Van Leeuwen, which set the level of average GDP a bit below that of the Roman empire (600 PPP 1990 dollars per year, versus 700), but they are not included in the dataset.

Per capita GDP in Roman times, according to Maddison (1990 PPP dollars)

What can we say about this impressive work? First, that it is truly impressive and daring. But then come the problems. Needless to say Maddison’s guessed estimates is one of the main issues or limitations, and this looks kind of downplayed by Bolt and van Zanden. As pointed out by Gregory Clark, in his 2009 Review of Maddison’s famous Contours of the World Economy:

“All the numbers Maddison estimates for the years before 1820 are fictions, as real as the relics peddled around Europe in the Middle Ages (…) Just as in the Middle Ages, there was a ready market for holy relics to lend prestige to the cathedrals and shrines of Europe (…), so among modern economists there is a hunger by the credulous for numbers, any numbers however dubious their provenance, to lend support to the model of the moment. Maddison supplies that market” (Clark 2009, pp. 1156-1157).

The working paper by Bolt and Van Zanden makes significant progress in substituting some fictitious numbers (d), with indirect estimates of GDP (c), but then in discussing the results it leaves unclear which numbers are reliable, which not, thus still leaving some ground for the “market for holy relics”. 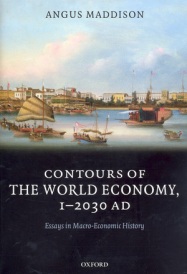 This is all the more problematic if we think that nominally all the estimates have been produced at 1990 international dollars. It is true that there is another part of the Maddison project specifically aiming at substituting 1990 purchasing power parities with 2005 ones. But this is not the point. The real point is that even 2005 PPPs would not change the fact that we are comparing economies of distant times under the assumption that differences in the cost of living remained unchanged over centuries, or even over millennia. This problem, not at all a minor neither a new one − e.g. Prados de la Escosura (2000) − is here practically ignored. One indeed may have the feeling that the authors (and Maddison before them) simply don’t care about the parities they use, de facto treating them as if they were at current prices. For example, they discuss the evidence emerging from real wages, saying that they confirm the gaps in per capita GDP: but the gaps in real wages are usually at the current parities of the time, historical parities, while those in GDP are at constant 1990 parities. If we assume, as reasonably should be, that differences in the cost of living changed over the centuries, following the different timing of economic growth, then the evidence from real wages (at current prices) may actually not confirm the GDP figures (at constant 1990 PPPs). Let’s take, for instance, China. It could be argued that differences in the cost of living, as compared to Europe, were before the industrial revolution, say in 1820, lower than in 1990, given that also the differences in per capita GDP were lower in 1820 than in 1990; hence, prices in 1820 China were relatively higher. The same is true for China when compared to Renaissance or Roman Italy (since prices in 1990 China were arguably significantly lower than prices in 1990 Italy, in comparison with the differences in the sixteenth century or in ancient times). This would mean that real GDP at current PPPs would be in 1820 even lower, as compared to Europe; or that 1820 China would have a per capita GDP remarkably lower than that of the Roman empire, maybe even lower than that of ancient Mesopotamia. Is this plausible?