Abstract – This article looks in more depth at the different ways in which ideas about cashless societies were articulated and explored in pre-1900 utopian literature. Taking examples from the works of key writers such as Thomas More, Robert Owen, William Morris and Edward Bellamy, it discusses the different ways in which the problems associated with conventional notes-and-coins monetary systems were tackled as well as looking at the proposals for alternative payment systems to take their place. Ultimately, what it shows is that although the desire to dispense with cash and find a more efficient and less-exploitable payment system is certainly nothing new, the practical problems associated with actually implementing such a system remain hugely challenging. This paper was written for the Cashless Society Project, an interdisciplinary and international effort to add some historical and analytical perspectives to discussions about the future of money, banking and payments. For more information, see http://cashlesssociety.wordpress.com

This short paper was distributed by NEP-HIS on 2012-09-03. It is part of a broader effort to discuss the future of money through contemporary and historical perspectives.

‘… new ideas about monetary systems have been presented and debated is the utopian treatise…. through which thinkers of all political persuasions could articulate their thoughts and ideas as to how to overcome the various practical and ethical problems associated with money.’

This was revealing as I expected cashlessness to emerge as part of the ‘classical political economy’, 19th century French economists like Léon Walras, J. B. Say, within the work of Stanley Jevons, Karl Menger or simply related to ideas dealing with the separation between real and nominal economies. Also of interest is that these early authors initially discuss money (in the form of gold and silver coins) and move to portray a dissatisfaction with financial intermediaries (which in a way echoes today’s critiques). 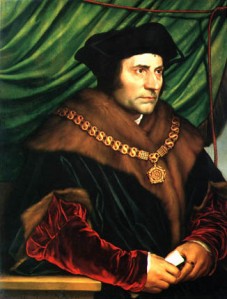 Matthew Hollow argues that in Utopia, More is concerned with how money is a hindrance to peace and prosperity and therefore the best way to do away with all the problems associated with money is to do away with it. But for for this to work society has to be reorganised from first principles. As a result, the inhabitants of the Island of Utopia are in no need of anything (as far as finance is concerned). A perfect society. An idea that later on reappears in many shape and forms, including 20th science fiction authors (which, by the way, take a superficial attitude towards this and largely side step deeper issues relating to money, financial institutions or economic organisation).

In Hollow’s interpretation of More, money is more than a medium of exchange, unit of account or store of value. It actually acquires a social dimension. An idea that is not really explored systematically until perhaps Georg Simmel’s The Philosophy of Money (1907) or even Viviana Zelizer’s The Social Meaning of Money (1994).

Hollow’s then takes us to the 19th century to show how More’s ideas influenced Robert Owen (1771–1858) and William Morris (1834–1896). Like More, Hollow tells us, Owen ‘detested’ the monetary system and proposed one of locations where workers could exchange their surplus, and was critical of  gold and silver ‘.. as a means of exchange and was particularly concerned about the effect that a shortage of either could have upon the welfare of the poor.’ Owen goes as far as proposing a medium of exchange with the quality of ‘… expansion and contraction to a fractional accuracy ..’ but fails to specify how this would work. We all know that Owen’s ideas were highly influential in both the US and Britain and in spite of several efforts, they all failed in practice.

Hollow also reminds us how More’s ideas of a perfect society with no ideas of private property or commercial profit resurge in William Morris’ News from Nowhere (1890). Its a future where money holds no value. So why is this relevant? Hollow says that these ideas ..’ reflected a deep seated unease that many contemporaries felt about the pace of economic and industrial development.’

Regarding Samuel Butler’s satirical utopian text Erewhon (1872), Hollow believes the message behind the ‘Musical Bank’ reflected Butler’s view of a fundamental reshaping of the already outworn financial services of his era and a critique of the coins and note system of the Western world.

Of course, a review of pre-1900 authors would be incomplete without Edward Bellamy’s now classic book. But here Hollow helps us by comparing and contrasting the Ballamy’s ideas with those of his contemporary utopians. This includes tackling head on whether Bellamy indeed introduced the idea of a ‘credit card’ in light of his own views on credit.

Finally, Hollow offers some conclusions as to why there is more in the socialist utopian literature about the cashless society than just removing the ‘conventional’ notes and coin system (which was already there as a posibility in More). But that it was technologically difficult and doing away with cash would require a major transformation of society. Here then a clear link with the idea of cashless and checkless that emerges in the mid-20th century along side business applications of computer technology.

In summary, Matthew Hollow offers a short yet provocative essay as to early notions of cashlessness which help to put the idea of a cashless society in long term perspective.

2 thoughts on “Utopian visions of the ‘cashless society’”